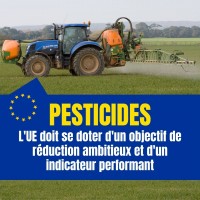 The EU Commission has presented a proposal to reduce pesticide use. This new regulation is a step forward, but the proposed goals are too weak. The agrobizz lobby and some countries try to make it even weaker. Now it is important that citizens and organisations make their voices heard at all levels. Please show that you support a stronger and much more ambitious pesticide regulation. We supply you with the reaction of the Save Bees and Farmers Citizens Initiative as an example.

Stimulate a strong EU pesticide regulation with enforceable reduction goals for every country in the EU. Counter the lobby of the chemical industry and industrial farming.

Participate to this consultation
Previous date
Next date

What the EU Commission proposes

The EU Commission proposes a 50% pesticide reduction in 2030. But the same was already promised in 2009 and it didn’t work. Since then, the use of pesticides has gone up, not down.

They also promised in 2011 to phase out the most toxic pesticides, but almost all are still on the market. The proposed 50% reduction for these chemicals is totally unacceptable.

They need to go as soon as possible.

(You can copy – paste (part of) this text below, but please introduce it with your own words. And add or change as you like)
The massive use of pesticides has a devastating effect on biodiversity and is a serious threat to our health, water, air and soils. It seriously threatens our food security, our climate and biodiversity. To give our children and the next generations a future, we urgently need a paradigm shift in agriculture and the way we treat our environment, using agroecological practices to start working with nature, rather than against it.
The European Citizens Initiative Save Bees and Farmers welcomes the European Commission proposal to cut pesticide use in the EU. However, the proposal is too weak to reach the needed change in agriculture: there is no time for half-measures!
A 50% reduction by 2030 is insufficient and we ask the European Commission, Council and Parliament to be much more ambitious. Agroecological food production systems increase yields, while protecting health, biodiversity. Implementing high-level IPM allows for reducing pesticides by more than 80% in a few years time.
Agroecological practices lead to an increase in biodiversity and soil fertility, better drought resilience and the elimination of costs for and dependence on pesticides and synthetic fertilizers. The new Regulation on the Sustainable Use of Pesticides should ensure a direct link with the Nature Restoration Law as well as the Sustainable Food System initiative as all are intrinsically linked!
In line with the ask from 1.2 million citizens that support the ECI Save Bees and Farmers we ask the EU to act towards:
1. An 80% reduction of synthetic pesticides by 2030, with a system that rewards farmers for working with nature (CAP funding). We disagree with the loopholes created so that in the end some Member States will reduce their national objective to 35%, leading to no fundamental changes in agricultural practices.
2. A full ban on the more toxic pesticides (i.e. the “Candidates for Substitution”) by 2030: alternatives exist, these should be banned at once!
3. The regulation should include a vision for a longer term, with a full phase out of synthetic pesticides by 2035. National Action Plans should be subject to the Commission’s approval and penalties should be prescribed for those Member states who fail to reach targets.
4. Basic principles of IPM should become mandatory. IPM should be very well defined. For instance, 5-year crop rotation should become the norm to dramatically cut pest pressure.
5. The SUR regulation should also state what IPM is not: aerial spraying, seed coating with pesticides, new genomic techniques as well as application of pesticides with so-called “precision technology” should not be considered IPM as they do not aim at reducing farmers’ dependence on pesticides.
6. The use of pesticides should be allowed only as a last resort, and only after the preventative, mechanical and biological methods have failed to deliver the desired outcome. This should be documented by the farmers and controlled by public authorities.
7. A minimum of 10% of fallow land for nature will preserve valuable resources and help fight pests, by allowing the natural predators to develop in these areas.
8. The proposal by the European Commission of a 3 m non-treated buffer zone next to sensitive areas and water courses is by far insufficient. Buffer zones leading to 0-residues outside the field should be set.
9. Ground water should be better protected. Member States, regions and municipalities should be given the possibility to ban pesticides on aquifers to protect drinking water.
10. The harmonised indicators on pesticides should be reviewed, by better including their toxicity, including that to the environment.

I want to act!

The consultation is over.

Did you take part in the consultation? Tell us

Thank you for taking the time to participate

Say it around you by sharing the page

Shake your representatives count on you

Support us
Top of the page